Between Esslingen and Cape Town: The path from model to photographer

Changing sides – at the peak of his modelling career, he changes sides. Behind the camera, a new phase of his life begins. Today, Michael Diehl is a sought-after photographer from Esslingen near Stuttgart with a fantastic portfolio of numerous genres who regularly reports in his popular blogs on his website.

For years, Michael Diehl stood as an internationally sought-after model in front of the lenses of major well-known photographers. His growing success thus also brought him into contact with the most successful photographers day in and day out. People who find a passion in their profession and perfect it. Michael had the opportunity to work with the best teachers and learn the tricks of the trade from the best of the best. In doing so, the subject of photography did not come into Michael’s life as a surprise. He has always been interested in looking through the lens and putting his own view of the world in front of the camera. A sensitive feeling for the overall picture, for the object and the detail, which flow together in their composition, is something he has always had a soft spot for.

After 15 years, at the peak of his modelling career, Michael decided to change his perspective and take the step behind the camera. 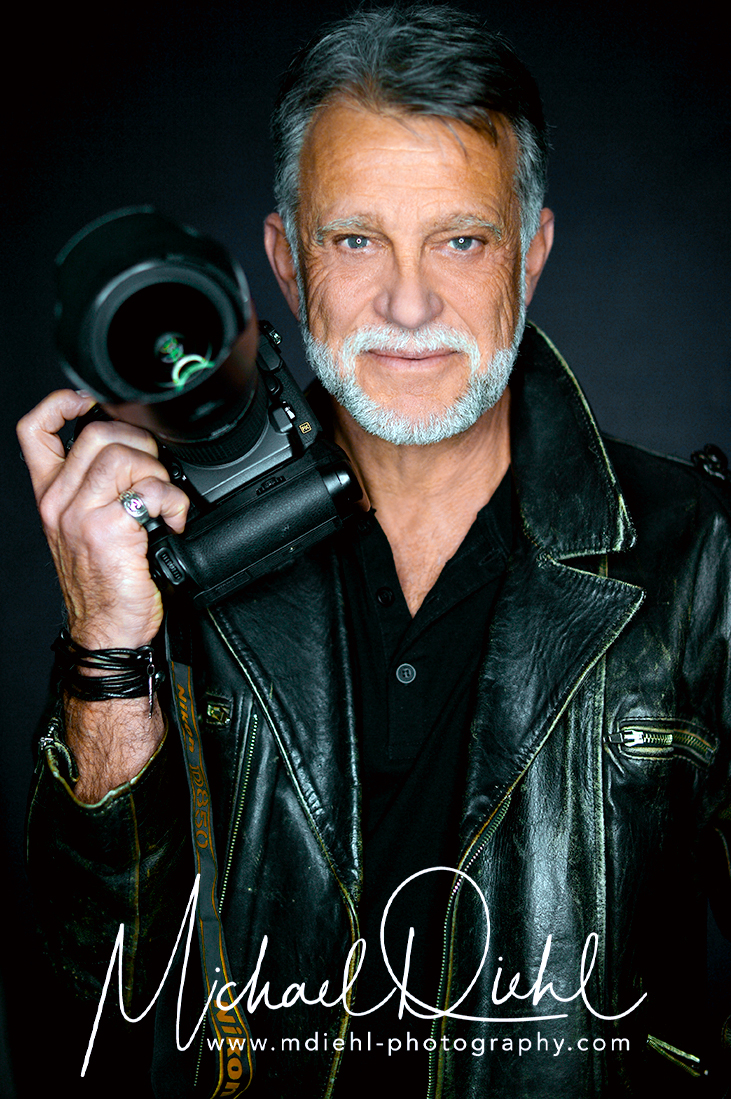 And there he found his new vocation, which was soon to change his whole life. The new career took him far away and to an exciting part of the world: South Africa.
The country at the southernmost tip of the world and especially the metropolis of Cape Town, one of the most beautiful cities in the world, turned out to be the perfect location for Michael’s photo productions. Not surprisingly, the breathtaking landscapes, the fascinating sunsets, the reversed seasons compared to Europe, the beautiful people of all skin colours and nations, as well as the wild, exotic animals invite you to click the shutter. In Cape Town, he learned the finer points of photography as an assistant for many years at the side of one of South Africa’s most famous photographers, Walter Ferrier. From their joint work and his own photographic talent, Michael developed his distinctive style, the photographic results of which are reflected in his expressive and great references. Numerous international projects for well-known fashion magazines, renowned fashion labels and popular catalogues followed. Cape Town captivated him and has not let him go to this day. In 1998, he got down to business and relocated from his home in Germany to the summery warm Cape Town as a permanent resident during the German winter. Under the African sun, nothing hindered the success of the motivated photographer, and Michael’s career steadily went upwards. His professional paths, as well as the intercultural life in his now second home Cape Town, have shaped Michael and opened his eyes to look much further and deeper. To be more tolerant, to understand other points of view, to adapt to different styles and to present them in his individual way.
Sometimes a cheetah, lion or other wild animals from a South African game reserve can be in the picture as actors… but even this is no problem for Michael, on the contrary… this is where photography really begins for him! In the course of his groundbreaking photography career, Michael decided to open his own stylish photo studio in Esslingen near Stuttgart, thus realising another dream.

With his international experience as a sought-after fashion and beauty photographer based near Stuttgart, this was the next step for him to be able to live out his own creativity even better and realise himself. His extensive portfolio also ranges from advertising, portrait and product photography to event photography for trade fairs and events.
One thing Michael has definitely been able to learn from his rich experience is how to relate to people, because he knows all sides of the play – that of the actors, that of the artists and that of the audience!

Michael Diehl Photography: an experienced photographer in advertising, fashion, beauty, lifestyle, portraits, stills and events with his own stylish photo studio in Esslingen near Stuttgart, which can also be used as a rental studio.